Celebrity Interviews, Pranks and Practical Joke Advice to be
Featured in Weekly Show 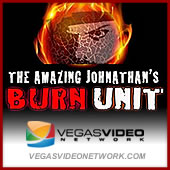 Burn Unit will feature interviews with his friends in the local entertainment community and many of the celebrities who find themselves in Las Vegas. Amazing Johnathan will also teach the show’s viewers his favorite pranks, practical jokes and magic effects that can be used in everyday life.

“Burn Unit is going to be a show unlike anything seen before. To make it great, I wanted to work with a company who understood what it takes to produce a high-quality show that I and my fans would be proud of”, said Amazing Johnathan, “With the Vegas Video Network, I’ve found what I believe to be the most experienced and professional online production firm in Las Vegas. Get ready world, this is going to be crazy!”

As with all VEGAS VIDEO NETWORK programming, Burn Unit will broadcast live and feature live chat questions from an online audience. The show will also be available as audio- and video-on-demand on the network’s website (http://VegasVideoNetwork.com), the Burn Unit website (http://BurnUnit.tv) and through a variety of syndication partners.

“When I moved to Las Vegas in 2005, the first show I insisted on seeing was The Amazing Johnathan at the Sahara,” said Scott Whitney, founder of the VEGAS VIDEO NETWORK, “As a long-time fan, I am very excited about producing a show which will deliver a weekly dose of Amazing Johnathan-inspired insanity to a worldwide audience.”

Burn Unit begins broadcasting every-other week LIVE on WEDNESDAY, January 30, 2013. It is NOT suitable for anybody under 16 years of age.

About the VEGAS VIDEO NETWORK, LLC
The VEGAS VIDEO NETWORK® is the first and only LIVE, online broadcasting network that specializes in insider news and expert views from Las Vegas locals to our neighbors and the world. We develop and produce all-original programming that is predicated on input and participation from our fan base. We are especially close to our worldwide audience because we focus on two key principles — approachability and authenticity. The VEGAS VIDEO NETWORK is a YouTube Partner, available on iTunes, Blip.tv, Livestream, Facebook, Twitter and Roku, and can be heard on AM 1400 KSHP. The network is owned and operated by PodWorx, Inc., an Internet broadcasting company that specializes in podcasts, Web TV, and live streaming video productions.